I spent the past 24 hours in Ura, a small village in the Bumthang Valley, where the locals celebrate their annual religious festival. I received a challenge to wear native clothing and see how I felt, and another to learn a local dance (thanks, Katia!). In a country with national dress standards, where men and women wear tee shirts and jeans under their traditional robes, and with strong tourist restrictions to prevent irreverent trampling of local customs and culture, this challenge could not have been more timely.

So instead of arriving at the festival in my sweatshirt and khakis (my uniform these days!), I donned a kira, the local formal wear. Given the religious and historical significance of a day that bursts with bold, rich fabrics, lovingly tailored and embroidered; mesmerizes with masks and artifacts that have been chiseled and crafted through generations; and thrums with dances and rituals that tell ancient stories, putting some care into my appearance seemed appropriate. Nonetheless, I wavered between feeling like a foreigner playing dress-up and a culturally-sensitive visitor.

It was a sea of tees and telescope lenses, as the migration of young Bhutanese to cities and their increased focus on work meant that local attendance was thin, and consisted mostly of school-aged children and elders. I was glad to be another kira in the crowd. I got smiles and quizzical looks as I practiced my Bhutanese greetings on anyone who would make eye contact, and yanks and readjustments by local women when my long skirt was out of sorts. My guard came down as I shared a log with two young Bhutanese women and their children, and we giggled, shrieked and cowered together as the festival clown jabbed each of us with a large wooden phallus. (Note to those who have not been to Bhutan: phallic symbols and representations are everywhere, from public buildings to homes and altars.) But being out of my usual clothing and the habits and movements that come along with it left me feeling vulnerable as I didn’t quite fit in with the tee-shirt clad, nor with the kira clan.

And then, after the big afternoon dance, all of the tourists left and it was just me, a fellow traveler, our driver/lama and the locals. It had gotten cold as the sun started to set, and I’d switched from my kira back into my trekker threads. I sat on the steps to the temple, watching the townspeople perform the closing ceremony, dancing and turning in a circle to the beat of the drum. An older local waved over to me to come and join; I sheepishly shook my head. Another turn around the circle and he waved and beckoned again, and again, I shook my head, embarrassed of my drab attire on such a significant day and during such a significant dance. He motioned again and I relented, joining the circle and learning the dances and turns and swoops of gratitude and reverence. I stumbled and sashayed, as the clown (without a phallus in hand, fortunately) and those nearby “1-2-3!”-ed as we circled below the temple and under the mist rolling in for the evening. I was welcomed, khakis and all.

So, kira or khakis, I suppose it’s less about the clothing worn and more about the attitude and energy carried. But between the significance of every bangle and bold hue in India and the stringency of proper traditional attire in Bhutan, I’ve been reminded that what I put on my body tells a story… which is easy to forget in a tee shirt and jeans culture. While clothes do not a (wo)man or a culture make, a gentle nod to local customs and willingness to change habits and learn new traditions can go a long way.

Posing in my kira with the Colonel, former bodyguard to the King

The festival clown playing pranks… The baby burst into tears for good reason! 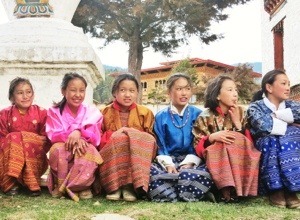 Adorable local girls in their kiras 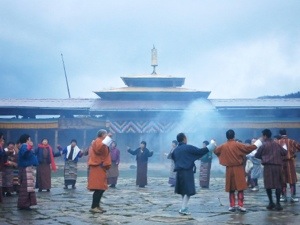