My final 48 hours in India led me to see how these challenges are greater than the sum of their daily missions: they’ve started to chisel away at how I think and act, slapped me right into the middle of India’s delicious and chaotic onslaught when I wanted to hover on the curb, and have even woven a giant, fate-like web to fall into.

Let’s rewind to last Tuesday, when I received a call from my friend Neet who happened to be in Delhi. “You should delay your trip to Bhutan and come to the Golden Temple in Amritsar with my family. I promise it will be an amazing experience.” Neet is one of the more inspiring, convincing and energetic fellows I know, and he and his family are Sikh, so I knew a call to the Bhutanese was in order. As I wavered over what path to take, I remembered Zoe Settle’s and Dave Allan’s challenges to zig at zag and my resolution to kill that indecisive part of myself (a nod is due to Mike Rothman.) I scrolled through texts over the past few weeks from Samta (my chai victim and new friend, thanks to Becky Straw), encouraging a trip to visit her in Amritsar. All signs pointed to Punjab. Now it was time to just take the action, let go, and see what would happen.

On Friday morning, instead of landing in Paro, I arrived in Chandigarh, the capital of Punjab, and Neet’s hometown. I got to see the city through his eyes, including the Rock Garden, a labyrinth dreamed up from a local’s backyard into acres of winding paths and waterfalls, mosaic-like walls and villages of figures made from everything from broken bangles to ceramic from discarded sinks and toilets. Families, friends and scrambling boys explored every corner, and I began to imagine Neet and his friends hiding in a lost alley years ago, playing cards and eating samosas.

“It’s a lot like India and life in general,” we laughed. “You take the old things that don’t work, smash them, mash them together, and repurpose them into something beautiful.”

Day fell into dusk and the four of us were well into our five hour drive to Amritsar. Slowly, the broad highways and fields became dusty, bustling mazes, and trucks and cars were replaced by tuk tuks and clusters of locals snacking in the city’s savory streets. As we started to approach the temple, that nervous, awkward, you’re-not-a-member-of-this-holy-place feeling started to rumble. I quickly learned that Sikhism stems from the teachings of different religions and views all beings as equal, evident in its open temple doors and langar, whereby visitors from all castes and creeds can sit side by side on the dining hall floor and enjoy food prepared by the communal kitchen.

After washing our hands and feet, we descended down through the white entranceway and into an expansive marble courtyard, a frame to the holy pool, in the center of which floats the gleaming Golden Temple. Families laid together under the archways, friends huddled together in a low hum, and men cleansed and meditated in the waters. Singing of the day’s lesson was shared (and translated) over a giant screen and a loud speaker. Underneath, the reverent sounds of prayer and reading mixed with the soft paces of bare soles on polished marble. A calm but eager crowd spilled out over the bridge to the temple, waiting to get in after a long pilgrimage. I felt deeply grounded and lifted beyond myself at the seem time.

“This place is busy 24 hours a day,” I was told. “At any time, there are people sleeping, volunteering, praying, waiting. You’ll never not find a crowd.”

And find a crowd we did, as we went to the langar hall to break chapatti. The banging of tin began to intersperse the reverent din, and as we arrived, we melded into a line to receive a metal plate to bring into the hall. Plates in hand, it was time to wait until the prior shift finished, and the doors opened to the next round. With a slow scuffle and a few sharp pushes, we spilled into the empty hall, where rows of mats acted as tables and chairs. Men and women with baskets of chapattis, ladles of dal and rice pudding made the rounds, and hundreds of us sat, knee to knee and spoon to spoon, eating quietly under the fluorescent light and watch of the gurus. Slowly the crowd filtered out, and a cleaning zamboni (oh yes!) hurdled through each row, removing the residue from the prior crowd to get ready for the next. As we left, we dropped our plates into a vat and into a whole new process where rows of volunteers cleaned, soaped, re-soaped, scrubbed, banged and dried the plates back to new. Effortlessly feeding 80,000 people a day, this place could also be a Six Sigma devotee’s dream.

Full of curiosity, connection and some of the more flavorful dal I’ve had over my six weeks in India, it was time to retire for the night so that we could return in the morning to offer prayers and a donation for Neet’s birthday. It’s hard to describe (and I will save you from a feeble attempt), but going to the holiest of sites with a devoted family, and being the sole redhead (shrouded, of course) in a sea of bright turbans was deeply humbling and inspiring. I was welcomed not only into a culture, but into a faith. I learned about my own faith, and how easy it can be to sit on the sidelines and wave at it, versus walking whole-heatedly into the fray. I saw selflessness and other-centeredness in everything from the Narulas sharing their family experience to the dal-dolers and devotees constantly giving of themselves to the community. I felt woven into the fabric of a country, state and sacred site that were wholly foreign.

I was contented that this would be the apex of my Amritsar experience. Unable to get on a flight or train that evening, and having waved off Neet and his parents, I planned a quiet night in at the hotel before my morning trip to Delhi. A handful of texts and phone calls later, I was to be picked up by Samta to attend a family function that evening. (If you recall, Samta and her family were the lovely folks that Blair and I met on a long-winded tour-boat, whom we engaged in a rollicking conversation thanks to a great challenge to talk to a stranger on a deeper level.) I was whisked into her nephew’s first birthday party, where I was a sight to be seen, a redhead in my “nice” kurta, which looked like house-wear compared to the gorgeous, embroidered and bedazzled saris and dresses that Samta’s sisters and cousins wore. I bumbled through my toddler-level Hindi, smiled and waved and ate snacks.

And then the music started. I was pulled into the dancing area and into the middle of the shimmying, dancing and singing. I couldn’t quite tell if the entire family was laughing at me or enjoying the spectacle of a foreigner attempting to imitate their flawless moves in my pre-teen-at-the-eighth-grade-dance style. But even as my Bhangra skills got worse, the veil of my self-consciousness lifted, revealing a spirited family that I began to feel deeply connected to, as we shook together, embraced and giggled.

A sharp jerk at my arm, and I was pulled off the dance floor by Samta’s mother with a serious and purposeful look. Perhaps I had inadvertently offended them? Perhaps my dancing was so appalling that it had to be stopped at once? She said nothing, but continued to pull me harder and closer to the buffet. “Food! Eat!” What relief… and what deliciousness.

As the night continued, we all continued to laugh and eat until our stomachs were heavy and our cheeks were sore. Words were translated and gestured, scoops of cake and kulcha were put into my fingers or into my mouth, and pictures and poses were snapped and shared. As I went to say goodbye to Samta’s mother, I vainly attempted a respectful gesture that Samta had taught me earlier. “No!” she cried, as her mother laughed and took my face in her hands. “That’s for the daughter in law. Not for family. She says that you are her daughter.”

To label what the Narulas and the Bhatias shared with me as “hospitality” or “generosity” would be the equivalent to calling the Taj Mahal “pretty” or “inspiring.” My foundational beliefs in family, faith and friendship deepened. I re-discovered that old feeling of being at home after six weeks of being anywhere but in a hometown. Faith has taken the lead over fear, and I will step into my next adventure and the unknown, trusting that there’s always a net to hurdle into.

It would have been easier and less risky to just say “no” and continue with the program as planned. But I always would have wondered what would have happened if I’d said “yes,” and, looking back, I would not have had the chance to experience how one yes leads to another, and to a path that I suppose only the travel gods get to giggle about, gossip on, and decide.

So the point of this long-winded tale, I suppose, is to just say yes today whether it seems small or far-fetched, mindless or gut-nagging. Break your plans and chisel and repurpose them into something new. Or even better, give someone else the opportunity to say yes.

Note: photos to be added later… The Bhutan Internet is intermittent and slow! 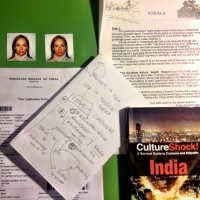 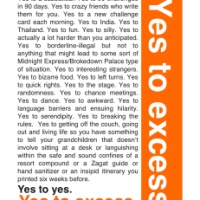