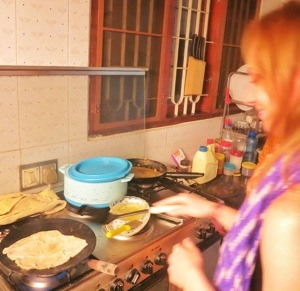 When I was a kid, I loved to pretend it was Opposite Day (or “not opposite night” as I called it). I loved the laughter from misunderstandings, the competition of who could come up with the craziest opposite, and the possibility of what could exist outside of the typical structure that I followed in a day.

Zoe Settle’s challenge made for the perfect grown-up Opposite Day: “Today, do everything the exact opposite as you planned it yesterday. If you planned to go right, turn left instead. If you thought about practicing yoga, perhaps go for a walk. If you wanted a day to yourself, talk to everyone you come across. Stop, consider your plan and do the opposite.”

24 hours ago, our plan for today was to spend five hours on a train from Kochi to Trivandum, where we had unwittingly locked ourselves into a spa with a stiff cancellation policy. With each conversation with the resort, we became more aware that we’d locked ourselves into spa hell instead of Ayurvedic nirvana. We wanted to go left but we felt like we were being forced right.

We must have had the spa gods on our side, and with a direct conversation and some technical difficulties, were able to cancel our commitment and completely reimagine the rest of our trip. So what are two girls to do with a free day in Kochi and 8 days with no commitments?

Instead of heading south to Trivandum into an increasingly irritating and unprofessional situation, we planned our adventure north to Goa. Instead of doing a weighted analysis of all of Trip Advisor’s reviews (and reviewers), we sought advice from a trusted friend of a friend (and went with it.) Instead of just going out to a nice Keralan dinner, we attended a cooking class and learned five new recipes.

It led us to an interesting conversation tonight, sitting on top of the roof of our homestay, eating chocolate and drinking chai above a late night impromptu football game, and below a line full of laundry drying in the night breeze. The past 24 hours have been all about the power of reconsideration and the fear that can come with big sweeping change that forces one out of just making little tweaks to a situation that isn’t working. They’ve also been about the magic and serendipity that comes when we start the ball rolling… Once we decided to change our plans, we snaked the last two seats on the flight, the last room at the retreat, and the last two spots in the cooking class.

There’s freedom in the opposite, and it doesn’t have to be a big action — I got just as much of a sense of adventure and freedom from walking down a new street this morning as I did from designing our plans for the next 7 days (yoga and Ayurveda retreat on the beach, by the way!) … And in knowing that all those plans could change in a minute and that the outcome would be just fine, if not better than we could imagine.

I hope you all have an amazing Opposite Day (err… “Not Opposite Night.”)